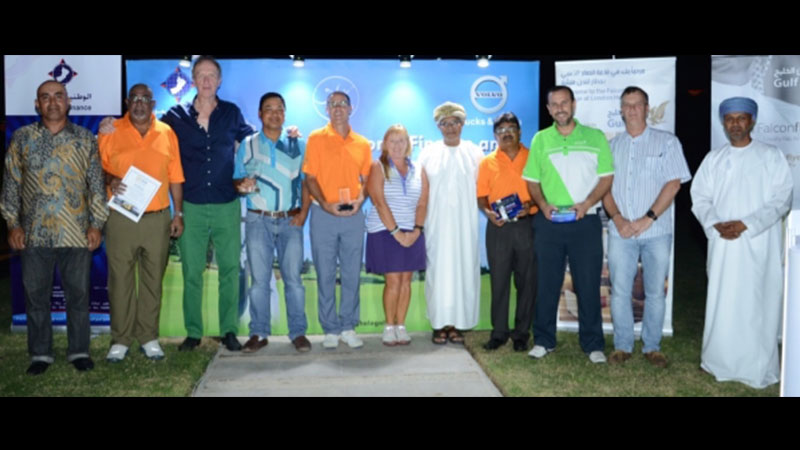 Muscat: Nassarudin Mohammed emerged the champion at the third Open Golf Tournament jointly organised by National Finance, one of the leading financial companies, in association with International Heavy Enterprises (IHE), the official dealers of Volvo Trucks and Buses.

According to a press release issued by the organisers, the tournament received an overwhelming response as golfers flocked to strut their swings and friends and family cheered them through.

Nassarudin Mohammed was declared the winner and proudly walked away with the grand trophy that was unveiled a few days ago to an ecstatic audience. An 18-hole round of 68 nett allowed Nassarudin to attain victory in the tournament. Giving him good competition was Ghala Golf Club member Sunny Nagpal, who narrowly missed out on a countback but also finished with a nett 68. With two more golfers scoring a nett 68, this close tournament kept the crowd on their toes.

With prizes to be given in various other categories, the men’s gross winner was Ghala Golf Club member Jeff Campbell with an impressive score of 72, while Lorenzo Basco came in as runner-up with a gross score of 76.

In the Ladies division, Yvonne Welling claimed first place with a nett score of 78. Jacky Franssen, scored a nett of 79, with a one shot clear runner-up place for the same.

National Finance and Volvo Trucks and Buses have always shown utmost dedication to developing junior golf in the region and graciously allowed all junior golfers to enter the tournament free of charge. With a separate category for the junior league, Oman junior national squad member Fahad Al Kitani bagged the junior nett winner title with an outstanding score of 71 nett.

When asked to comment on the event, Leon Sassen, Events Coordinator at Ghala Golf Club, said: “It’s truly fantastic to see so many players competing in this event. It’s the first big tournament at Ghala Golf Club this year and to have 116 players is a great effort. Congratulations to all the competitors this year.”

With as many as 116 players for the 2015 tournament, the event received an outstanding support from major sponsors namely National Finance and Volvo Trucks & Buses. Gulf Air and OUA Travel coupled with Zahara Tours and Shangri La Barr Al Jissah Resort & Spa extended their additional support to the event.

Commenting on the event Mr. Taya Jandal Ali, Chairman of National Finance, said: “Each year we are getting bigger and bigger; this event is definitely a premium event in the golfing calendar in Muscat. The entire day was outstanding and congratulations again to all the winners of the day.”

Although the players faced some warmer conditions than expected, the Ghala Golf Club layout proved again to be a fantastic championship facility. Built into a natural wadi in Muscat, the Ghala Valley Golf course is designed to flow through a beautiful setting of mountainous backdrops and spectacular sea views. Originally created as a sand course in 1971, Ghala Golf Club opened the first nine holes of its grass course in December 2010 and the remaining nine was completed in 2012.

“We feel that our aim to bring together passionate golfers from all across was fulfilled. It’s a great platform for some healthy competition and even serves the purpose of networking. We are certain that all our initiatives to promote golf in the country will definitely see more participants for Open Tournament 2016,” Ziyad Al Zubair, Ghala Golf Club board member, said.